San Jose and the greater Silicon Valley is considered the tech capital of the world; a region long known for its visionary and entrepreneurial spirit. This hub of innovation is also one of great affluence with the median household income sitting at over $80,000 and very low unemployment rates of 2.3% in Santa Clara County and 1.9% in San Mateo County. On the flip side of this economic strength, there are an estimated 21,000 16-24 year olds in these same counties that are currently disconnected from work and school – that’s 8% of the young adult population in the area. And those numbers do not include the 16-18 year olds that may be in school today, but are at an increasingly high risk of becoming disconnected from work and education tomorrow. It is this growing economic divide and opportunity gap that drives our work here.

In 2014, Juma launched operations in San Jose  with the opening of Levi’s Stadium, home of the San Francisco 49ers. Since then, we have expanded our operation to all major sports venues in the area, including Avaya Stadium, SAP Center, and Excite Park. Our goal is to employ youth, to support them and meet them where they are at, and to give them a launchpoint to pursue their present and future goals, be it in education, a career pathway, or both. We offer a safe working environment, a space where they can make mistakes and learn from them; or fail forward, as we say here at Juma. We strive to be part of an ecosystem of support for each and every one of our young people.

Juma’s work in San Jose is probably best summed by one of young people, Edward. Edward is close to completing the Juma program which has armed him with increased confidence and a clear set of goals for his future. He is exploring employment options post-Juma as well as pursuing his Associate’s Degree at San Jose City College. When asked about his support system and what or who will help him get there, he said, “Juma. The Juma team is my support system.”

Everyday, we strive to be that – and more – for all of our youth.

FOR YOUTH FOR EMPLOYERS FOR VOLUNTEERS 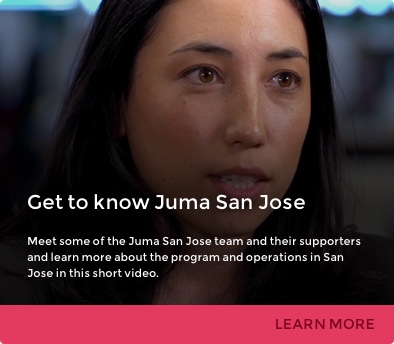